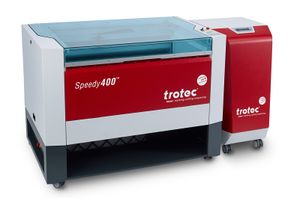 The Trotec Speedy 400 laser engraver is used to engrave and cut materials based on specified images and shapes. The working area of the laser is 24" x 29". This is useful for making enclosures out of acrylic, engraving designs into many materials, creating trophies, and cutting any two dimensional shape out of a variety of materials. It also has a rotary attachment which enables cylindrical objects such as drinking glasses and hydro flasks to be engraved with detailed designs.

Performing a cut or engrave with the laser will always begin with Inkscape by opening/importing an image, pdf, DXF, or similar file. If you do not have a file yet then it can also be used to create geometries. Once a file has been brought into Inkscape, it must be adjusted so that job control can distinguish between what should be cut out of the material and what should be engraved. A cut is indicated by a hairline red stroke (in the RGB color scheme) and an engrave is indicated by the color black. After the graphic is prepared, it is transferred to job control using [File] > [Print] and making sure trotec is selected as the device. It will then pop up in the job list on the right hand side of JobControl. At this point the laser cutter should be set up by turning it on, placing the material on the honeycomb table, and then raising the table to focus the laser. The final steps are then to click the USB icon in job control to connect to the laser cutter, drag the job onto the to scale honeycomb table, set the correct material properties, and then click the play button to perform the cut/engrave. When performing an engrave on a cylindrical object, the set up process in Inkscape is the same but there are a few differences in job control and laser cutter itself. Primarily, the honeycomb table must be exchanged for the rotary tool, which must be done while the laser cutter is OFF. The laser cutter should automatically recognize that the rotary is attached. The only change in job control is that the accessory should be changed in the settings from the honeycomb table to the rotary tool.

First, import a George Fox logo into Inkscape and set it up so that the logo is an engrave with a cut circle surrounding it. Once this is done, print the job to job control and run the job on a piece of scrap material.

Essentially the same as Speedy 300. The Speedy 400 uses the same software and general setup as the Speedy 300, however it has a larger bed and a few backend setting differences.

NOTE: Currently, the Speedy 400 should not be used for acrylic**. There are some issues with settings/airflow that cause acrylic to often catch fire while cutting (which, as you would imagine, is bad)

** If you know what you are doing and are very careful, small (<10 inches) pieces of 1/4" or 1/8" acrylic allow for sufficient airflow to avoid catching fire. Small pieces of 1/2" acrylic can often work as well, as long as you are careful. If the fumes light fire while cutting, pause the print IMMEDIATELY (the same button as start), or, if needed, stop it entirely (although this will abort the cut and you will not be able to continue). Often pausing allows the fire to go out and the acrylic to cool down, so for small cuts you may be able to continue, carefully, after pausing. If you must cut large sheets of acrylic, remove the paper from the area you are cutting, as close to the size of your cut as possible. Although it is not the paper that is burning, removing it seems to reduce the possibility of fire. Try not to remove any more paper than absolutely necessary, as the paper keeps the acrylic clean and protected from scratches when in the stock pile.