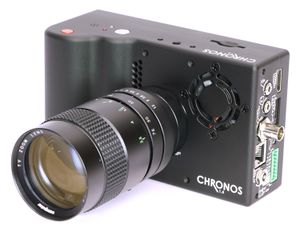 Attach the camera to a tripod and turn the camera on. Give it a minute to warm up (especially if it’s cold) Set your desired frame rate in the Record Settings menu based on how fast the thing you’re trying to film is. Set Aperture (dial on the lens) and Gain (Record Settings menu) so the image is properly exposed (not too bright, not too dark) Set White Balance in the “Set White Balance” menu. Either make an educated guess, or hold up a white object in front of the camera and press “Set Custom White Balance”. Perform a black calibration. Place the lens cap on the lens and press the Black Cal button in the main menu. Ideally the camera should run for 15-20 minutes before performing a Black Cal to let the sensor get up to temperature. NOTE: Doing a Black Cal will discard any unsaved footage Change your trigger settings if using an external trigger or want to set up trigger delay Press the red record button to start recording. Make sure your image is properly exposed and that your subject is in focus. Anything in focus will be highlighted in red with focus peaking. NOTE: Pressing record will discard any unsaved footage Trigger the camera when ready, the camera will stop recording or continue to record for a short period of time depending on your trigger settings. The camera can be triggered by using the red record button or external trigger. Note that trigger delay settings will not apply to the red record button. The footage in memory will be shown on the screen. You can press and hold the right arrow to play the footage forward. Play rate should usually be set to 30fps. To reduce file size, set start and end markers before saving. Do this by scrolling the playback slider (goes from bottom to top) to the start of the part you want to keep and press “Mark Start”, then scroll to the end of the part you want to keep and click “Mark End”. The portion that will be saved is highlighted in red next to the playback slider. Then click Save. Once saved, the red will turn to green, indicating that it is safe to capture footage again. Make sure to safely eject your storage media before removing it from the camera. This can be done by going to the Play menu and clicking Settings, then “Safely Remove” When finished using the camera, press the power button to turn off the camera. Do not hold the power button for more than 4 seconds. This will cause a forced shutdown, which could corrupt the camera’s internal memory. Only perform a forced shutdown if the camera becomes completely unresponsive to touchscreen input. Return the camera to its case, nicely coil trigger and power cables and place those in the case as well.

There is almost nothing you could do that would result in injury from using the high speed camera. Obviously things you could be filming (e.g. explosions) could be dangerous, and you must use common sense in what you decide to place in front of the camera. In most every situation, the camera is at risk of damage more than you are. Always observe the following precautionary guidelines when using the camera.

The camera should always be securely mounted or held so it is not at risk of falling/being knocked over If there’s risk of things flying and hitting the camera, it should be behind a shield Don’t set down or store the camera in an environment that could damage it. Examples include outdoors when raining, in direct sunlight, on rough surfaces, or in places where things could fall/knock against the camera Don’t put any stress on the lens, the mount is fragile If the lens is ever disconnected, the sensor cap must be immediately attached When not being used, the camera should be stored in its pelican case with latches secured. Latches should always be secured, even if you’re coming right back!